Home › About Pilgrims Hall › Our History

Pilgrims Hall is a lovely old Regency house set in 19 acres of gardens and grazing land and standing adjacent to the ancient route to Canterbury, known as the Pilgrims Way.

An ancient track which carried generations of pilgrims during the Middle Ages on their journey from Waltham Abbey to the Shrine of Thomas-a-Becket at Canterbury, runs alongside the house. This ancient track, known as Pilgrims Way, is where the name Pilgrims Hall came from.

There are accounts of a property on the site, belonging to one John Owen Wood, dating back to 1753, but the earliest official records of Pilgrims Hall can be found on the County Archive Maps of 1795. At that time the property was a square farmhouse of two storeys, about the size of the entrance hall of today. It was then owned by John Keilly a retired Colonial Administrator who had lived for many years in the West Indies. His grave can be found in South Weald Church yard.

In 1815 a Portuguese Roman Catholic priest named Emmanuel Dios Santos bought the property. He was a man of some wealth, and we believe he was noted for his preaching. It was he who first developed and extended the property by the addition of the two bow-fronted wings. These were called Waterloo Bows, named after the battle of the same year. The Cupola with a bell at the top was also erected, primarily so that the servants would be able to know the time. Many other features were also added – the ’Ha Ha’ ditch, central lake, water garden, Italian garden and a variety of trees.

Internally, added features included the panelled entrance with grand staircase, the symmetrical layout, the veranda and the ornate ceilings. These of course are all in miniature, and only copies of the more extensive originals found in stately homes, this being the custom of the day.

We believe that the Lodge, built at the entrance to the property, was used as a chapel. In 1843, the property became a Boys’ School—a rather Dickensian type of establishment, but this only continued for 17 years.

In 1860, the house became a family home once again with the Walmesley, Arrow and Womersley families living here in succession. It was then purchased in 1913 by the Lawrence family, who continued to live here until 1968. During their residence a spacious three-storey East Wing was built; the ground floor contained the Dairy, the first floor was given to the nurseries, and the second floor became accommodation for staff. 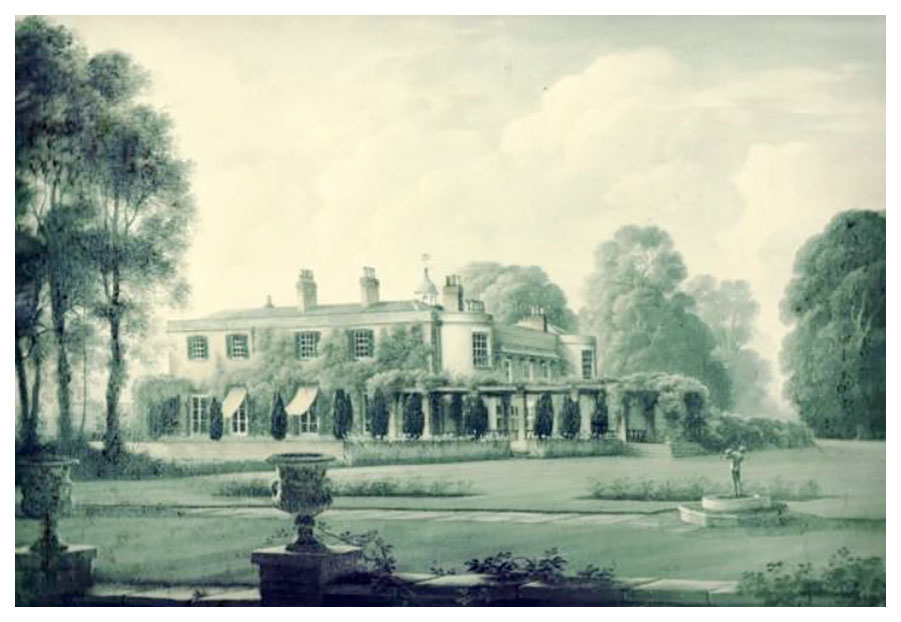 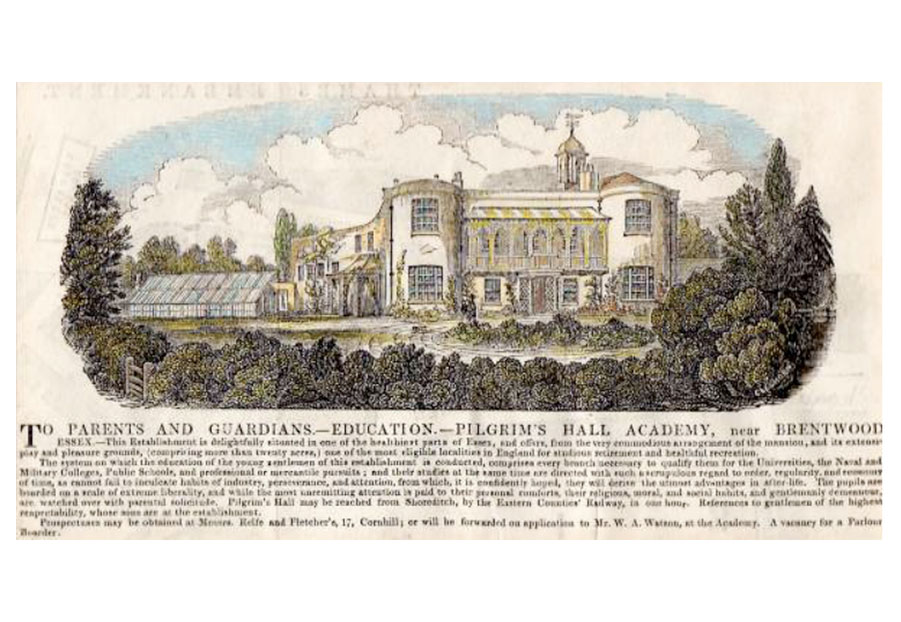 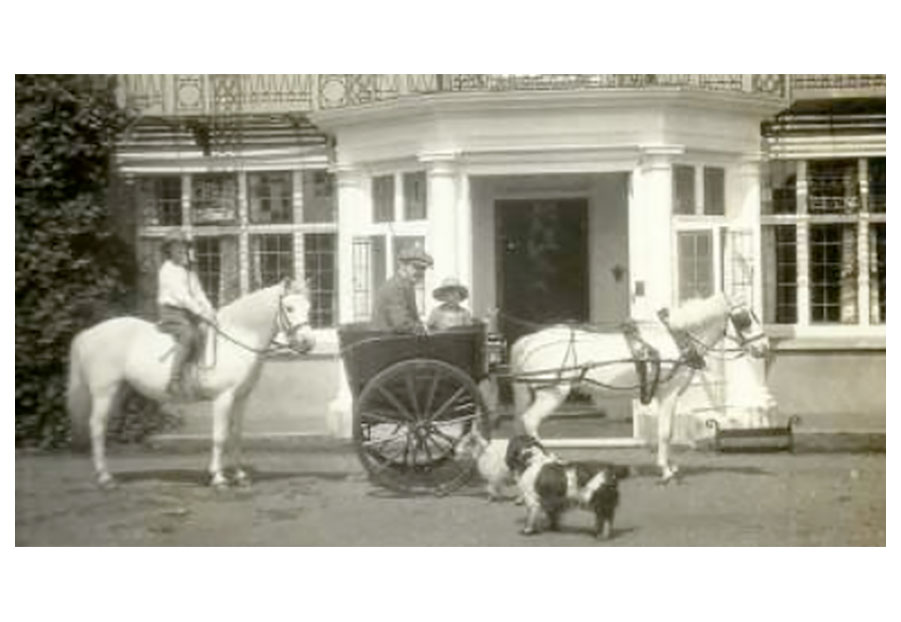 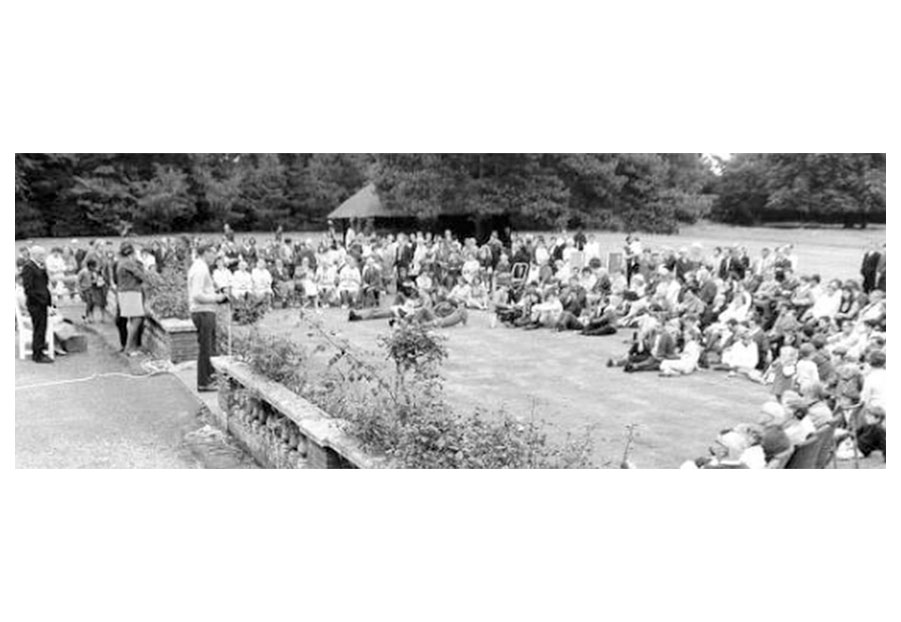 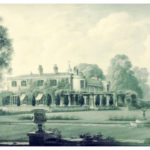 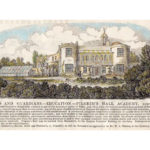 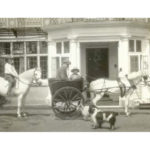 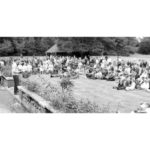 In the Lawrence era there was a full complement of domestic staff and a governess, as well as eight gardeners and several grooms and chauffeurs. Much of the life and times of that era are described in the book “The Private Life of a Country House” by Lesley Lewis, a Lawrence family member who grew up here as a child.

In 1968 the property was bought for the sum of £30,000 by Pilgrims Hall Fellowship Ltd, a Christian charitable trust. The vision given to Roy & Shirley Willis for a Christian teaching, caring, counselling and retreat centre remains very much to this day. We are thankful to God therefore, for the many individuals and groups that continue to pass weekly through our doors.

Five decades have now passed since the Hall was purchased and the current work begun. In that time the world and society at large have changed dramatically. Pilgrims Hall has always sought to be relevant to the needs of the church and contemporary society. At the same time we have sought to reconfirm and firmly champion our founding principles of dependence on Jesus Christ, the veracity of the Bible as the Word of God, and the work of the Holy Spirit in the life of the believer.